Demography and economic geography – Northern European state. The Kingdom of Sweden is the most populous and also the largest among the Scandinavian states. In the last twenty years the total population has increased by more than 10%, from about 8,800,000 residents in 1993, to 9,631,261 in 2014 (according to an estimate by UNDESA, United Nations Department of Economic and Social Affairs). In 2005 an administrative reorganization of the territory was carried out, recognizing the status of metropolitan areas to the three most important cities, namely Stockholm (2,192,433 residents in 2013), Gothenburg (968,993) and Malmö (685,428, together with Lund): more than a quarter of the total population lives in them. Significant Swedish minorities are found in Finland (5.5%), both in the autonomous region of the Åland Islands and along the Baltic coast. Much less significant is the presence of Swedes in Denmark, especially near the Øresund bridge, inaugurated in July 2000. Sweden has been part of the European Union since 1995; however, the country chose by referendum not to join the single currency, keeping the Swedish krona in force.

Swedish immigration management. – In 2013, the serious riots in Stockholm, Malmö and other cities created a lot of attention towards Swedish immigration management. The amount of immigrants is lower than in other European Union countries: official statistics, in fact, refer to 1.3 million foreign people or with at least one foreign parent, equal to 14.5% of the total population, a percentage that it increases to 16% if we also consider half a million Swedish citizens born to both immigrant parents. With the exception of groups that arrived for employment reasons from neighboring countries, most of the immigrants arrived in Sweden taking advantage of the government’s choice to welcome those with political motivations: therefore the larger communities come from politically unstable and potentially problematic situations,

From a religious point of view, Swedish society (Lutheran with a strong agnostic presence) must today coexist with large, but unprecedented Catholic communities (Poles, South Americans and some Syriacs) and Muslims (mostly Sunnis, except the Iranians who are Shiites). Each religious minority tends to theorize and practice a more rigid endogamy than the rest of the population. Both Catholics and Muslims appear to have many more children than the natives, also due to the condition of very low income, supported by government subsidies. All these elements have led to a strong demographic growth of these communities.

But the geographical element that makes Swedish immigration management unique is the organization of urban space. In fact, in each of the big cities in the seventies large popular neighborhoods had been built (Miljonprogrammet, plan for the construction of one million housing units), which in recent decades have been mostly populated by immigrants (in the capital, the Husby district has more than 80% of immigrants out of over 12,000 residents): the lowest per capita income in thewhole of Sweden is recorded here, as immigrants access only the least paid jobs. The government also offers public facilities such as schools, libraries, swimming pools and social centers in these neighborhoods, thus helping to create small enclavescivilizations of origin and to keep the children of immigrants separate from those of Swedes.

History – The years following the 2006 elections – from which the center-right coalition Alliance for Sweden emerged as the winner between the moderate coalition party (M, Moderata samlingspartiet), the Liberal People’s Party (FP, Folkpartiet Liberalerna), the Christian Democrats ( KD, KristDemokraterna) and the Center Party (C, Centerpartiet) – saw in Sweden the questioning of both the welfare system and immigration policies, which had hitherto been the flagship of the country. Lowering the tax burden on businesses and cutting social benefits (especially unemployment) were, in fact, among the main objectives of the government led by the leader of M, Fredrik Reinfeldt. In a climate of mounting anti-immigrant polemics, accused of being a cost to the welfare state and a threat to security, in 2007 the government approved the repatriation of refugees who did not risk their lives in their country and the exclusion of immigrants. illegal immigrants from public health. In the same year, relations with the Islamic community became complicated due to the publication of some ironic drawings on Mohammed.

According to a2zdirectory, the center-right coalition recorded a decline in support in the first years of its mandate, but for its ability to cope with the repercussions of the global crisis it was rewarded with a new success in the 2010 elections. Despite the Social Democratic Workers’ Party (S, Socialdemokratiska arbetarepartiet) confirmed itself as the first party (30.7%, 112 seats), the elections assigned M (30.1%, 107 seats) and its allies (C, 6.6% and 23 seats; KD, 5.6 % and 19 seats; FP, 7.1% and 24 seats) the relative majority of parliamentary seats. The far-right party and anti-immigration Swedish Democrats (SD, Sverige Demokraterna) took 5.7% (20 seats) and entered Parliament for the first time. The new Reinfeldt government – the first conservative leader to obtain a second mandate in a country with a social democratic tradition – promoted privatization and liberalization but, not having an absolute majority, did not attempt breakthrough reforms and, indeed, often resorted to compromises.

In December 2010 an Islamic suicide bomber, born in ῾Irāq and residing in Sweden for decades, detonated some bombs in the center of Stockholm, of which he was the only victim: since then Sweden has promoted greater international cooperation for strengthen the fight against terrorism. In May 2013, for several days, in the suburbs of Stockholm and other cities, mainly inhabited by immigrants, clashes took place between the police forces and some demonstrators, who initially protested against the killing of a 70-year-old by the police, then against youth unemployment and the marginalization of immigrants.

Meanwhile, the privatizations promoted in the education, health and pensions sectors again caused the support of the government to collapse and in the elections of September 2014 the Social Democrats prevailed (31% and 113 seats), while M stopped at 23.3%. SD reached 12.9% (49 seats), becoming the third largest party in Sweden. Although S did not obtain an absolute majority, their leader Kjell Stefan Löfven was appointed premier and formed a coalition government with the greens of Miljöpartiet de gröna (MP, 6.9% and 25 seats). The new government proved very unstable, however, and in December 2014 Löfven was forced into a budget agreement with center-right opposition parties to avoid early elections.

In terms of foreign policy, Sweden continued to promote the development of a cooperation and defense policy with the other Nordic and Baltic countries and, in compliance with its policy of neutrality, to remain outside NATO (North Atlantic Treaty Organization). In 2011, the government therefore decided not to participate in the bombing of Libya (see) against the regime of Muammar Gaddafi and to limit his participation in reconnaissance flights. 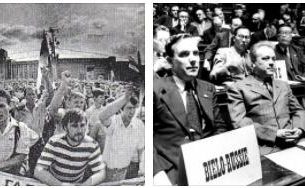