After I had passed my Abitur in summer 2010, I wanted to travel to the USA again for a longer period of time. After spending 5 months in Maine when I was 17, I now wanted to get to know the exact opposite and so my choice quickly fell on California, where I always wanted to go. I quickly came across the MicroEDU website via the Internet and I’m still very happy about that.

The summer session was perfect for me to see something different before I started studying. I was quickly provided with the most important information via email with my MicroEDU advisor. My advisor kept me up to date at all times and provided me with all the information. I always had a lot of questions and concerns and she was always at my side and her answers by email usually came the next day. I have always felt very well looked after by her – thank you very much!

Since I still had my graduation ball in front of me and wanted to travel around after the summer session, I had quite a bit of leeway in which the summer session had to be. In the end there were two universities left that were offering a course at exactly this time, and when I heard about an English course for international students that was offered at the UCI, the choice fell on this university. Get more student review on University of California Irvine on jibin123.

Since my flight arrived in Los Angeles quite late, I had to spend another night in a nearby hotel. The Travelodge Costa Mesa is highly recommended here, as they take a shuttle to the university the next morning. It was also the case with other students, so that I was able to make my first contacts with classmates at breakfast in the hotel in the morning.

On the introductory day, the most important things were explained to us and there was a small “recruitment test”. On the basis of this, one was classified into the different language levels. A was the lowest level and F the most difficult. For all German students I would like to say at this point that they should not worry if their language skills are not that good! I met students there who could just say a few sentences. I think most Germans really don’t have to worry about the language.

On the introductory day, we were also told about the so-called “activities” that you can register for. For example, surfing lessons were offered, a trip to Disneyland or Santa Monica (I would definitely recommend Santa Monica here!). There were also many activities that were free. This included, for example, the “Bonfire”, a campfire on the beach with food. I would definitely take part in the activities that are free, with the others I would recommend checking beforehand whether it is cheaper if you plan it yourself!

Used I have it in the dormitories on the UCI campus. My way to school was about 15 minutes. In the “dorms” you share the room with another person. A bed, wardrobe and a fairly spacious desk are provided. I was quite surprised, the room was actually quite big. You could live very well in it for two. The bathroom had 2 toilets and 2 showers, which you had to share with the rest of the girls on the floor. I estimate 8-10 girls per bathroom. At the end of the week, the bathroom didn’t look so nice anymore, so I usually took a shower with flip-flops;). At the end of the week there was also a cleaning lady who was the bright spot. The kitchen was completely shared, as well as the living room with TV. In the kitchen there was a small cupboard for everyone, by being able to put his things. Although there were multiple fridges, space was limited so be quick and secure your spot is worth it.

They went shopping at Albertsons, which was about 10 minutes away on foot and had everything you needed to live. There were several fast food restaurants on the university campus that were often used for a quick lunch. Actually there was everything on the campus from restaurants to supermarkets, cinemas and even gas stations. But the area was really very big! In the full 4 weeks I couldn’t see everything, the university is simply too huge for that.

My English course consisted of 3 courses. In first grade I had “Idiom & Vocabulary”. Idioms are phrases that are often used in American. This course was very interesting because you didn’t really learn that kind of thing in school and you can really improve your English skills with this course. After that I had “writting” with my all time favorite teacher Dave. If you should get it too, don’t be frightened by the first impression. At first glance it seems to be a bit stricter, but it is very funny and I learned the most from him by far. My last course was speaking and understanding, which often included group work and was great fun. You got homework, wrote tests or had to give presentations, nevertheless you always had enough free time.

Although I was rated at the highest level, I didn’t find the course too difficult! Of course you also had to learn something in the afternoon, but that was actually limited. Furthermore, you had the possibility to choose courses for free that took place in the afternoon. There were no grades for these courses, you only had to show up 4 out of 6 times to pass the course. If you do this summer session for the most part to have fun, I would recommend just taking one additional course so that you have more time for other things in the afternoons!

Only 3 minutes away from the “Dorms” is a large sports complex with a pool, fitness courses, several sports equipment and sports fields. For $ 30 you can register there for a month and use everything. For me it was worth it because of the pool.

Irvine itself is the safest city in California. This reassured my parents a lot;) Although Irvine is not a big city now and doesn’t have any great activities to offer, I found Irvine to be perfect for a summer session. From Irvine it was very easy to plan a day trip to Los Angeles or San Diego by car. Both were only about 1 ½ hours away. Some even went to Las Vegas for the weekend. In addition, Irvine impressed with its sensational location to the many beaches ! Huntington Beach is particularly recommended, especially if you want to watch surfers;)

As a little extra tip to everyone who loves roller coasters as much as I do: Six Flags Magic Mountain in Los Angeles is the best park I’ve ever been to! There are really only roller coasters in this park, one more spectacular than the next. Definitely go in x2, but only in the evening! The view is really very nice… – before you plunge into the depths lying down, upside down and backwards!

The weather was so much, I would definitely pack a couple of wool jackets and long jeans. The month of July in which I was there was rather mixed. But I heard that the next 4-week students in August were much more lucky with the weather!

I hope that my experience report has convinced others to go to the UCI and not just rely on the well-known ones like UCLA or Berkeley. The UCI is really a great university and I had a great time! Thanks again to MicroEDU !! 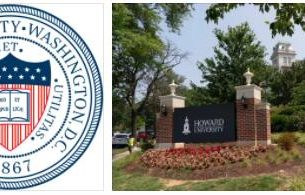 Colleges and Universities in Washington, DC by Area Code