I did my semester abroad at Brock University in St. Catharines in Canada. This rather small and not very touristy city is located 20km west of the Niagara Falls and thus in the warmest area of ​​Canada. It is even known as a wine-growing area. After some back and forth, my choice of country fell on Canada and then it came down to the right university. Since I wanted to study business administration and no engineering subjects anyway, very few universities fell through the grid and my selection remained large. During the semester I wanted to focus primarily on the country and its people and less on studying, so I chose the Brock, as it was very easy to travel to Niagara Falls and the big cities in eastern Canada. Get more student review on Brock University on jibin123.

The application process was very easy. After a few signatures, a letter of motivation and at the time no language test, I was able to send everything to MicroEDU and after a review they passed everything on to Canada. After about 6 weeks I was accepted.

As far as the recognition of grades is concerned, I was able to conclude a learning agreement with my university. As a result, I have selected 5 possible courses in advance and given them for examination by the university. In the end I only took 3 of the courses, because on the one hand I only wanted to take a maximum of 3 courses and on the other hand I only received confirmation for 3 courses. However, I only get the definitive confirmation of crediting now, after submitting my transcript.

I was looking for an apartment from home in May / June. It was super easy! I have registered with the Facebook group Brock University International Students and there are regular housing offers for only one semester and not a whole year. After a Skype interview, I didn’t just want to sign a contract without ever seeing a real person, everything went very quickly and I had the confirmation. The house was in Thorold, close to the university, but always at least one change to downtown or the Pen Center. In my opinion that wasn’t bad, and I don’t think it’s better to go downtown. There is a lot going on at the Brock and you better go shopping at the Pen Center anyway. My landlord also regularly displays apartments in the Facebook group and I can only recommend him very much. In addition to the house, he has also completely renovated another one very close to the Pen Center. If you want, you can find him under Live here St. Catharines in the Facebook group or at kijiji.ca (you can really buy anything there! A bit like a Canadian Ebay).

The way of studying in Canada was very different for me than in Germany! My courses have all been attended by around 70-80 people and the learning is mostly about memorizing rather than understanding. The effort is generally a bit higher, but the material is not more difficult.

Basically, I recommend that you make sure that you have few seminars, tutorials… when choosing a course. All of my courses consisted of just one lecture, so I had a lot of free time. Other fellow students had a significantly higher weekly workload for the same number of courses.

On to Brock: There were some events at the International Office where we had the opportunity to get to know people from all over the world. And outside of these events, too, the employees were always on hand to offer advice and assistance and were real contacts.

Really worth mentioning at Brock University are the sports facilities !! In addition to some of the university’s own leagues, for example to play football or volleyball, there is a fitness center, dance studios / or. Rooms in which fitness courses (free for all students) are offered, a swimming pool, 3 sports halls, squash rooms, a spinning room… So there should really be something for every sports enthusiast.

As I mentioned before, my choice of courses gave me a lot of free time. I did this to a large extent by traveling to the larger cities in the east (they are really well connected by Mega Bus) and also to Algonquin Park (I would definitely recommend this trip at the end of September / beginning of October). The second big part took place in Brock’s sports rooms and in my flat share. Because I was lucky enough to have great roommates !

Downtown St. Catharines also has some nice cafes and bars, but I haven’t been there very often. The Pen Center is also ideal for shopping and the Niagara On the Lake Outlet Center is also worth a visit, even if the Canadians don’t necessarily understand the word outlet to mean the same price reductions as Germans, you can get some bargains there.

Finally, a few tips that are wildly confused : 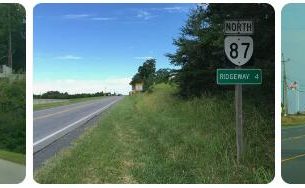 State Route 11 and 12 in North Carolina